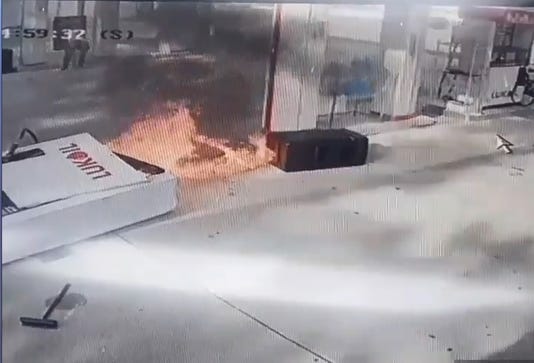 We received a recent news article from one of our New Jersey customers about a gas station fire where, if you watch the video on link below, a number of things went wrong:

In addition to the driver driving off with the nozzle (remember New Jersey does not allow self-serve fueling), it appears that the shear valve at the base of the dispenser did not shear, which could have shut off the flow of fuel and thus preventing the fire. But also the dispenser was ripped off its base when the driver drove off, so the breakaway did not break. And while an earnest employee did run towards the accident with a fire extinguisher, it is unclear if Rule #1 of gas station fire – shut off all power to the dispenser– was followed. If you are using our Class C UST operator training courses, you know the 4 steps of large spill and fire response

If you are a Class A/B UST operator and want to make sure your staff know how to response to a major incident, make sure you include these basic steps in your training. If you’d rather use a third party to train, track and certify your Class C operators, check out our Class C courses listings which approved in nearly all states.