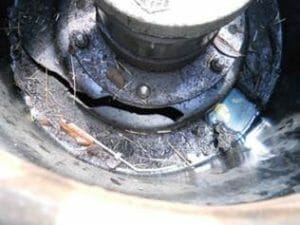 Note the large crack in the bottom of the spill bucket: A trained Class A/B operator would know this is bad.

The Petroleum Marketers Association of America (PMAA) has published their opinion of the proposed changes to the Federal UST rule changes and it’s not exactly supportive.  According to the PMMA article published below, the changes are essentially cost-prohibitive. PMAA provided a breakdown of estimated annual cost per location (plus the whole nation, $1,553,172,720 annually) but a quick look shows many of the supposed costs are either already being done by operators or already required by state law or both. For example:

To be fair, there are some bona fide new items proposed and these items are not free. Although more and more states are adopting these ideas anyway…

Anyone who’s been in the industry a while can tell you that today’s USTs are both most prone to problems at these three specific locations, and, ironically, the least tested portions of the UST system. So the proposed rules address the parts most likely to fail or leak. Testing these three key points are not randomly selected as regulatory curiosities but based on state leak studies that show us where today’s UST still leak or fail.

To be further fair, we think the proposed EPA test for secondary containment piping by opening up the sump lid for a visual inspection is in fact expensive, dangerous (crunched toes, confined space, lets water in) and ultimately unnecessary. Let the sump sensor do its job and let operator be trained to respond to alarms).

Anyway, here’s the latest below. We’d like to think something could be negotiated between marketers and the regulators and hopefully some common sense will prevail. Personally we’d like to see the impact numbers adjusted to account for concerns like ours and balance that against the reduction of leaks the proposed rules hope to achieve.

The Harper-Barrow letter urges newly confirmed EPA Administrator Gina McCarthy to withdraw the proposed rule and form a Small Business Advocacy Review (SBAR) panel. The Landrieu-Risch letter is very similar to the House letter and also requests EPA to provide information regarding the extent to which small businesses were asked for information pertaining to the proposed rules new and existing UST requirements. PMAA is concerned the EPA failed to follow federal law and conduct a thorough analysis of the significant compliance costs the rule would impose on small business petroleum marketers. PMAA’s own economic impact analysis shows that the EPA’s estimated $900 in annual compliance costs is substantially off the mark. Last month, Rep. Colleen Hanabusa (D-HI) sent her own letter to EPA pertaining to the state of Hawaii. The House Small Business Committee also plans to send their own letter in the coming weeks over EPA’s UST cost concerns.

PMAA’s UST Task Force has worked diligently on this issue since the rule was first proposed, meeting with the EPA, winning a comment deadline extension, drafting comments, collecting cost data and coordinating a Small Business Administration review of the EPA’s rulemaking process. The ultimate goal of PMAA’s regulatory and Congressional efforts is to force the EPA to convene a SBAR panel so that the proposed rule can be re-written in a way that significantly reduces any new compliance costs on retail marketers.

PMAA would like to thank Reps. Harper and Barrow for championing the House letter as well as Senators Landrieu and Risch for their leadership in the Senate. PMAA is hopeful EPA will eventually finalize a rule lowering new costs for all marketers, large and small.