Highlights from the National Tanks Conference 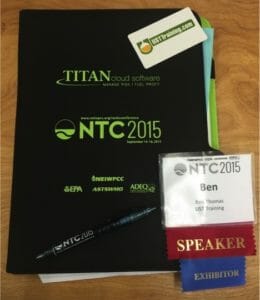 Ben Thomas of UST Training recently attended the 25th Annual National Tanks Conference in Phoenix, AZ, an event he’s proudly attended, help organize or presented at since 1996. Here are some of the highlights:

Largest Attendance to Date: We tipped the scales at over 800 attendees this year, the highest attended UST conference ever. Attendees included nearly every state UST program, many Indian tribes, many EPA officials, major UST owners, testers, contractors and more. 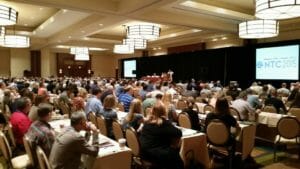 Keynote on Changing Behaviors: It was great to have the nationally recognized speaker Jennifer Tabanico of Action Research talk about shifting the focus away from pure enforcement to motivational practices that change behaviors about how we do or don’t do things right in the UST world. Ben Thomas wrote about this in his (in)famous 2004 LUSTLine article I Don’t Train; I Enforce! More about this soon.

New Rules: Almost every UST session started with a reminder about the new EPA UST rules and how they apply, depending on where your UST is located. (see map). Overall the session questions seemed to focus on some fairly detailed, technical issues rather than broad ones so it’s Ben’s opinion the whole rules package mostly made sense to folks in attendance, though we will continue to ask questions about many smaller items.

A Word from The Top: Carolyn Hoskinson, the nation’s top UST official, did a great Tank Savvy Minute cameo.

Sump Testing: As you may now know, all spill buckets and certain containment sumps will eventually have to be tested every three years. That’s been a requirement in California for years so they shared their experiences. The big take-home was California’s report that 50% of its sumps were not liquid tight. That’s from data from 2003 in a state with 14,000 UST sites. California’s Laura Fisher offered some great advice to UST owners and inspectors alike:

While not definitive on a national level, the discussion in the room leaned towards saying a failed (cracked) spill bucket or sump did not necessarily equal a suspected release.

Kevin Henderson of Mississippi gave a great talk on how test spill buckets (hydrostatic or vacuum) and sumps (hydrostatic only) based on PEI RP 1200 and talked about using the 1/16″ loss within one hour as the leak criteria. We learned the basic steps of preparation, testing and analyzing the results. Testing for sumps is similar but is limited to hydrostatic testing. Double-walled containers seem to be a better technology so testing involved measuring for loss in the interstice versus the outer wall. An Incon rep showed the audience a new sump testing device that’s rolling out:  The Sump Test System. 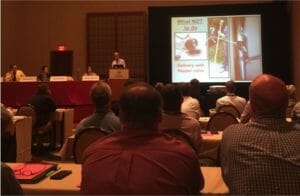 Overfill inspections: The State of New Hampshire presented data showing that one in four overfill devices (25%) had problems in New Hampshire that could not be corrected during inspections. This means they found considerable problems with overfill equipment. Hopefully the new UST rules should address this by looking closer at the functionality of ball float valves, flapper arms and high level alarms. When asked how many states currently did overfill prevention equipment inspections, only a few hands raised up so expect to find some surprises when the inspection rules take affect in your state or tribe. John Olko of the NJ DEP showed a video of an incredible overfill caused by a number things including driver inattention.

Driver Awareness: New Hampshire is also leading the nation in developing an online driver awareness program for those who deliver fuel to UST systems. Operator Training Coordinator Suzanne Connelly of the NH DES showed us what the program would look like. It should be out shortly so stay tuned for details.

30-Day Walk Throughs. Friend and colleague Dave Piercy of JD2 Environmental showed us how their company does 30-day walkthroughs, another requirement coming our way over the next few years. Stating that electronic monitoring alone will not do, Dave stressed the importance of a quality monthly visual inspections of equipment and paperwork. David talked about electronic versus manual forms, pencil-whipping forms, and the impact of opening sumps and spill buckets more often.

Doug Hansen of the Utah DEQ gave an excellent talk about their experience using monthly inspections and how their success came about by learning how to make the forms easier to fill out.

Since 2009 we’ve been providing our customers at UST Training with monthly forms using PEI’s RP 900 to help operators get ready for monthly inspections and were happy to see the form be so widely praised at the conference. 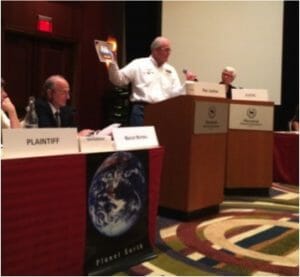 Operator Training on Trial: Ben Thomas helped organize a workshop presented as a skit where Operator Training was accused by Environment of not doing its job. We had attorneys, many witnesses and a judge. The audience heard the evidence and became the jury at the end. It was a very creative and engaging way to talk about the effects of operator training in UST compliance. The verdict was mixed with many of the jury members wanting more data on operator training’s effectiveness.

Field Constructed Tanks and Airport Hydrant Systems. Get ready for a new universe of USTs and acronyms: Field Constructed Tanks (FCT) and Airport Hydrant Systems (AHS). We had some excellent speakers talk about the special technologies and compliance challenges of these large, complex and custom systems. The US Navy shared as an example the Red Hill Tanks at Pearl Harbor by way of showing the uniqueness of such “USTs.” For instance, it can takes days to set up a leak test for a multi-million gallon tank, which has a big impact on site operations.

Ben Thomas provided training for the Red Hill Tanks early this year and gained unique first hand experience. Check out this great YouTube video on Red Hill to get a sense of the scale of the newly included USTs to the regulatory world.

We also learned about a smaller universe of fuel hydrant systems at national airports. It remains a bit unclear after the conference exactly how these tanks, previously deferred from most UST rules, would be identified and calculated for applicability to the rules.

So overall, a great conference! A big thanks to NEIWPCC, EPA OUST, ASTSMWO and AZ DEQ!