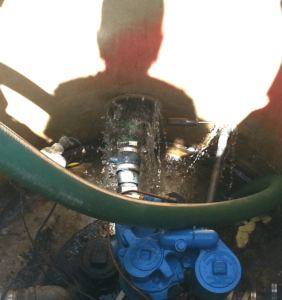 Kudos to Bruce Garrett and the rest of the Team Members of PMAA’s Underground Storage Tank (UST) Task Force as the U.S. EPA Office of Underground Storage Tanks (OUST) announced last week that it has approved PMAA’s low liquid level integrity test as an alternative method for containment sump testing that is required under the 2015 federal UST regulations. The 2015 regulations require liquid testing every three years of all containment sumps used for interstitial monitoring of piping. However, the test method cited in the rule requires filling sumps with water above the penetration points in the sump wall. This sump test method would be prohibitively expensive for tank owners. Instead, the PMAA UST Task Force developed an alternative test for containment sumps.

The alternative requires filling sumps only to the level of a liquid sensing device equipped with a positive shutdown that is mounted below penetration points in the sump wall. PMAA’s alternative test method will significantly reduce reoccurring sump testing compliance costs for tank owners while being equally protective of the environment as filling the sump to the top, according to the OUST. This is an important victory for petroleum marketers that builds on previous cost saving flexibility won by the PMAA UST Task Force during the rulemaking process.

OUST also clarified, at PMAA’s request, that water used for spill bucket and sump testing may be reused by third party vendors at other sites in order to further reduce the cost of handling and disposal of test liquids. In addition, OUST clarified that if double walled pipe systems using sumps for interstitial monitoring were installed before the date secondary containment for piping was first required by regulation, the tank owner may instead use leak detectors and annual line tightness testing to meet leak detection requirements. This would remove the need to test containment sumps because annual line tightness tests would replace interstitial monitoring as the selected method of leak detection. OUST also approved PMAA’s request to allow the use of a liquid level audible alarm as a primary method of overfill protection where removing a fully functional in-tank probe to meet visual inspection requirements would destroy operability of the probe.

The savings to our industry resulting from this guidance are HUGE!  These changes are the result of several meetings during the past three years between the PMAA UST Task Force with Bruce Garrett serving as a key subject matter expert. Many thanks to Bruce for all his time and hard work…we appreciate his tireless efforts!  And, PMAA is continuing to work with OUST on additional flexibility measures for compliance with the 2015 UST requirements. A compliance bulletin explaining the 2015 regulations and PMAA’s alternative test method, and how it can be used for further flexibility under state regulations, will be sent out soon.  This initiative is a prime example of how our PMAA dues provide direct cost-savings to NECSEMA members.