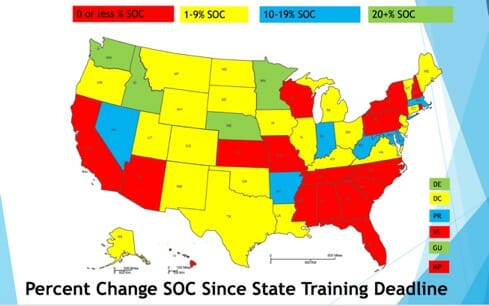 That’s the question that Ben Thomas of UST Training attempted to answer at a two-hour workshop September 10 at the National Tanks Conference in Louisville, Kentucky. Ben has been in the UST industry since 1986 and has been training UST operators throughout the US since 2003. Based on personal experience since then he believes, anecdotally, that things are getting better. But is there a way to prove it? Ben set out to find out.

Based on research done in 2018, Ben presented graphs of compliance rates for all states from 2008 to 2018, using data compiled by the US EPA. Each state submits data every 6 months to the EPA. The graphs showed what percentage of tanks are in what’s termed Significant Operational Compliance or SOC for short. If, say, 75% of all tanks inspected  within that time frame were in SOC, then the score would be a 75%, or a solid grade of “C”.

When reviewing each state’s SOC numbers, Ben inserted the training deadline to the timeline and asked the audience to observe what happened in time afterwards. Did compliance rates go up (improved?), stay the same (no effect?) or go down (what the heck happened?)

For each state, the audience got to vote: Here’s what they said, using a simple majority show of hands.

So in the end, the majority of the audience felt that based on the charts, operator training is probably showing success but it is very state dependent.

Ben is still doing research to determine if there are other or better ways to measure the impact of UST operator training. What’s your idea? Send it to Ben@USTtraining.com